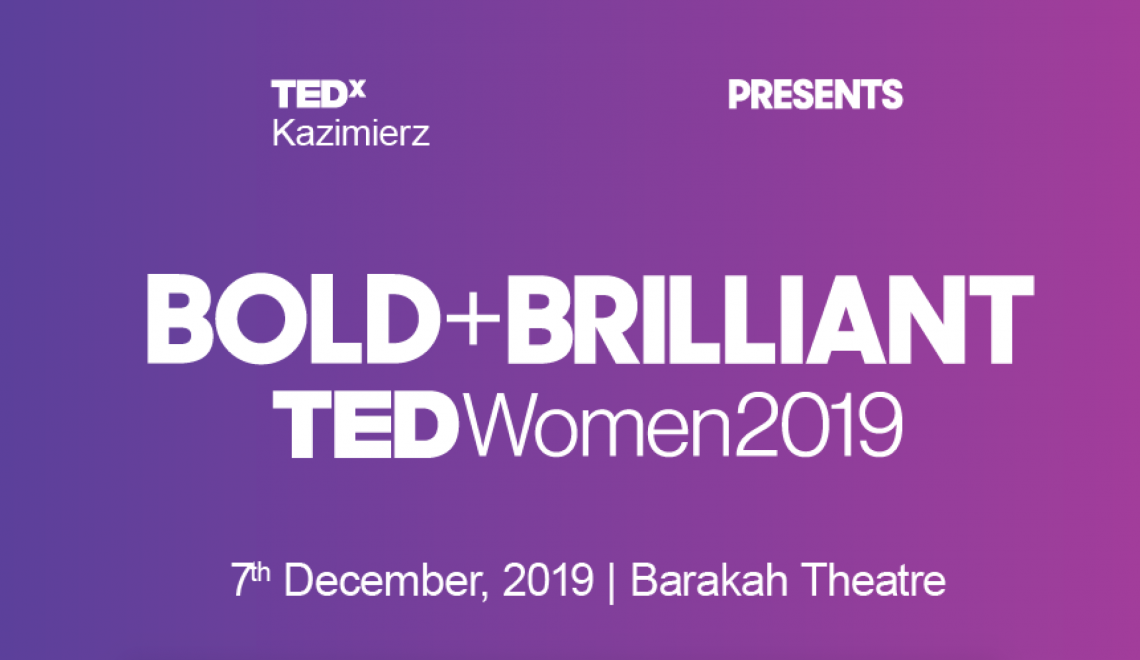 We celebrated the twenty four talks and performances that have been given by women at TEDxKazimierz events since 2015. That’s 40% of all our talks.

You can see descriptions of these talks and performance (and other slides shown during the event) here . We would love the percentage of talks by women to be higher. You can help us by nominating brilliant ideas for the TEDxKazimierz stage, via our “idea submission” form here.  For information about how we choose speakers go here.

You can find links and descriptions of all our past TEDxKazimierz talks in the below links:
Illumination  (2018)

Our two live speakers were Alexandra Hoskyn founder of the The Chatty Cafe Scheme  talking about her idea that enables people to talk to strangers, Caroline Ravn about her experience of being a professional magician in a very male dominated profession.

Alex was the first live speaker ever at TEDxKazimierzWomen, by profession a Social Worker on a Learning Disability and Autism team in Oldham, is predominantly known as a founder of The Chatty Cafe Scheme. It is a simple, yet quite remarkable project aims at encouraging customers to sit with other customers in a cafe or any participating venues and have a chat. This year we heard  Alexandra at the TEDxKazimierzWomen and listened to her speech about the origins and outcome of this innovative project. Being an ambitious and persistent individual, Alex shared the experiences she gained while running the project in order to convince all of us that in fact, sometimes, not much is needed to achieve something remarkable and contribute to social well-being other than a good idea and a willingness to try to put it into action. For more about this great idea visit https://thechattycafescheme.co.uk/

If you want to get involved in helping with getting Chatty Cafes going in Kazimierz, Krakow, Poland or anywhere else, fill in this form.

Caroline is one of Sweden’s most respected magicians. She is not only sought after in Sweden but also all around the world for her combination of storytelling, humor and magic. She has been seen on TV, as a cover of many magazines, performed in the heart of show business Las Vegas and received several Swedish Nationals, Nordic Champions awards and the prize of Inspiration of the Year. Being one of the very few women in her industry she’s constantly confronting prejudice, gender inequality and sexism – sometimes to her advantage. During her upbringing in the south of Sweden, she fell in love with magic and illusions from an early age. Not knowing what society would think of this, nor what social norms had to say said about a woman in the male-dominated world of magic, she continued on a remarkable journey to discover what secrets were out there. Not until embarking on her professional path had she ever experienced the need to fight so hard, and yet sometimes so little, to reach her goals.

We also showed Live Streamed talks from the TED Women conference https://tedwomen2019.ted.com/  by the following speakers:

They will not be available online yet, but most probably will be published on TED.com over the next few months. You can read more about the conference and blog posts about each session here.

We had an NGO showcase of projects led by or for women introduced by Ola Złocka – Head of Speaker Research at TEDxKazimierz. These were not TEDx Talks and are not officially endorsed by TEDxKazimierz or TED, but we like what they are doing. The NGOs who had their two minutes on stage were:

Building local community in, and fighting negative stereotypes of, Nowa Huta by organising meetings, workshops and events, for kids and grown ups.

Fundaja Głos Serca www.facebook.com/fundacjaglosserca https://glosserca.org/
Provides refuge hostel for women who need to escape from domestic violence and other problems, helps people with disabilities to find work, builds community in and around a Cracow Community Garden (Krakowski Ogród Społeczny).

Mamo Pracuj www.facebook.com/pg/MamoPracuj/about
https://mamopracuj.pl
This organisation supports women who want to go back to work after maternity leave, and to balance their personal and professional life. It organises workshops, events, training, and maintains a database of employers who provide help and support for young mums. We showed this film (with English subtitles).

A recycling initative: they re-use obsolete city billboards by teaching women how to turn them into handbags. They organise workshops and are creating pro recyling community.

Women in Agile www.facebook.com/groups/263277417687186
Provides free workshops and training for women on company premises about the Agile methodology, much used by technology companies.

We had workshops from Gabor Zoltán Halmai about public speaking,  Kriti Spinoff about Meditation, Paweł Wołodko and Kuba Kania did close up magic in the breaks to entertain our guests, and a magic workshop. Dan Medina and Kasia Oczko provided live music as people arrived and played at our after-party.

The fabulous efforts of our entire team of volunteers working entirely for free is as always much appreciated, as in that of our sponsors who contribute towards our costs, like speaker travel expenses, theatre rental and filming.

We have just been granted to a licence to do more TEDxKazimierz events next year. 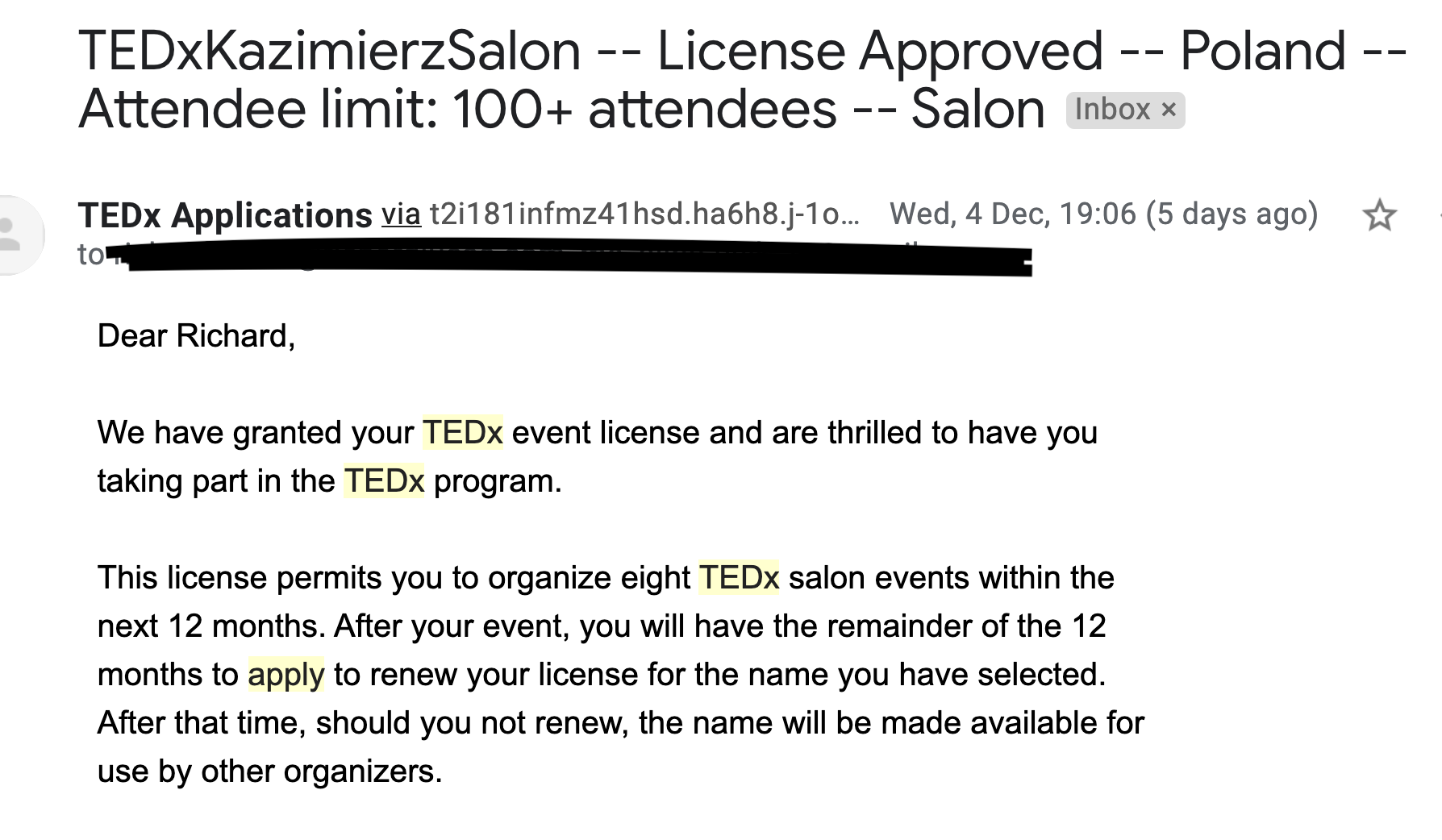 If you want to help us please take a look at the resources here and fill in our form here.

TED Circles
TED Circles are a new TED initiative to encourage conversations around TED content. We showed the TED Circles video – that was shown at TEDWomen – you can see it here. If you want to host a TED Circle, either sign up directly via www.tedcircles.com, or if you want to get involved in Krakow, we have a sign up form here. Richard will be glad to share his experience, invite you to his (space allowing), help you start yours, or maybe join yours as a participant.

We asked our performers and workshop organisers to give us profiles, we we are providing below:

Paweł Wołodko is a young magician from Cracow, Poland. Starting out as a street magician, he now performs all over the country. He has performed more than 400 times, and one of them was at TEDxKazimierz in 2018! In the last 5 years, he has been traveling around the world, learning from the best magicians in the world like Dynamo, Johnny Thompson or Dani DaOrtiz. He has performed in many cities in Poland. His sleight of hand is appreciated by the greatest magicians in the world. Paweł’s shows are described as sophisticated, entertaining and surprising.

Jakub Kania – 20 years old magician living in Cracow.
He is specializing in card magic and sleight of hand. His journey in magic started 5 years ago by watching British magician Dynamo, and since then he is working on his tricks ever since. During the event you will be able to experience the magic happening in front of your eyes. Jakub, conversely to our performer- Paweł Wołodko, will be sneaking through the seats, to bring you personal touch with the magic! 🃏🎩

What does science say about meditation? How to start? How can I meditate if I am unable to empty my mind?

Attend this interesting session to find out the answers. The session includes an easy meditation technique that even total beginners can do. Kriti leads the marketing and communications at #OMGKRK – a foundation supporting the startup ecosystem in Krakow. Kriti has a decade-long experience in marketing and has worked in both the corporate and non-profit sectors.

Kriti is also an entrepreneur. Besides working for other organizations, Kriti also manages her own business. She is the founder of Yogific, an organization that hosts vegan-themed Yoga festivals in Europe. So far, Yogific has hosted 28 events in 5 countries in collaboration with over 200 Yoga teachers and wellbeing experts. Kriti has run wellness workshops for companies such as Samsung and Gartner.

I am a public speaker, who loves social events and engaging with people frequently. I will hold a Storytelling workshop with the title: Discover Your Personal Stories

My approach to public speaking is holistic, that is, for me, public speaking is much more than a skill to learn. More than just a way to make more money. Public speaking is a tool to get to know yourself, how you can use your mind, your body, and your soul to share a piece of you through speaking. I live in Kraków i mówię trochę po Polsku!

The aim is to discover and develop personal stories in a safe environment so that you get ready to share then in the “real” world. I strongly believe that the best way to connect to other people is through emotions and emotions are best felt through personal stories. And yes, you have many personal stories that people want to be told!

What exactly will happen?

– Gábor shares basic information about how a story is structured.

– We will get in touch with our stories with the help of mindfulness.

– We develop the stories in groupwork

– We share the stories and give each other constructive feedback.

All this in a friendly, welcoming environment. The workshop itself requires being present and active. This workshop is not for passive bystanders but for willing people, who are ready to face their own dragons.

Dan Medina (featuring Gosia Oczko on cello) is the lead singer and guitarist of the rock band GRAVITY. This magnificent band was formed in Kraków, in 2010. The band has played with well-known Polish artists such as IRA, Akurat, Lady Pank, Oddział Zamknięty, Czesław Mozil, Patrycja Markowska, and Jamal.

He also recorded his debut self-titled EP later that year. The EP features the songs “Diggin´ Holes”, “Marioneta”, “All My Dues” and “Come”.

You can listen to some of his songs here: https://spoti.fi/2OSo74f

Keep up to date via http://tedxkazimierz.com/ and sign up for our newsletter at the bottom of the page.